Now a word was secretly brought to me, And my ear received a whisper of it.   In disquieting thoughts from the visions of the night, When deep sleep falls on men, Fear came upon me, and trembling, Which made all my bones shake. Then a spirit passed before my face; The hair on my body stood up.   It stood still, But I could not discern its appearance.  A form was before my eyes (Job 4:12-16).

Sounds like something out of a horror movie, doesn’t it?   What an eerie feeling it is to sense that something is in the room with you while you are sleeping.  It makes the hairs on your body stand up, indeed.

This night vision is not a work of fiction.  It is real.  It happened to a man name Eliphaz.  He was one of Job’s friends.  When he and two other friends found out about the calamities Job had gone through–losing his livestock, possessions, children and finally, his health, they went to see him.  They were so stunned when they saw the condition he was in–probably disfigured from the boils covering his body, they wept, and threw dust over their heads in deep mourning.  They sat with him in silence for a while until each of them began to speak to Job, assuming that he had brought his suffering upon himself because of sin.

Eliphaz shared the night vision he had.  It was used to illustrate his point that no innocent person has ever perished or the upright ever cut off, implying that Job was neither innocent nor upright.  However, we have read stories of the innocent and the upright being persecuted, martyred.  It was not up to Eliphaz to determine whether or not Job brought this suffering on himself.  Job didn’t need to hear these hurtful words.  He needed a friend.

Job’s whole experience shows us that God doesn’t do bad things to people–He allows it sometimes.  And we are not to judge others.  We can’t assume that they are suffering because of something they did. And that bad things happen to good people too.  And in the case of Eliphaz, people misunderstand who God is.  He believed that God was punishing Job when it was Satan who was responsible for these calamities.

Eliphaz believed that Job must have done something wrong and that for him to say that he was innocent, was like saying he was more righteous and pure than God.  Job was not attacking God’s character but was maintaining his innocence.  He knew that he hadn’t done anything to deserve what had happened to him.  The devil wanted Job to believe that God was punishing him and was trying to get him to curse him.  The spirit was either Satan himself or an evil spirit sent by him to distort a true picture of God and to destroy Job’s faith in Him.

The Bible advises us, “do not believe every spirit, but test the spirits to see whether they are from God, because many false prophets have gone out into the world” (1 John 4:1).

Something else that stood out for me in the vision were the words, “Now a word was secretly brought to me, And my ear received a whisper of it.”  This took place at night and it was in secret.  God’s doesn’t operate like this.  His truth is light and it is not secret.  We have to be discerning and test whatever new “light” we receive and see if it is in harmony with the Word of God. 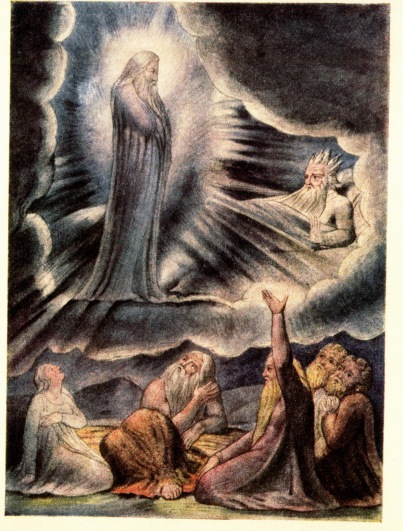