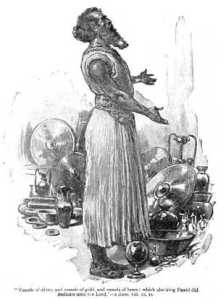 Key phrases that stood out for me:

When King Toi of Hamath heard that David had defeated the entire army of Hadadezar, the king of Zobah, he sent his son Joram to greet David and bless him.  David had fought against the same king who had been at war with Toi and defeated him.

David accepted the articles Joram brought him–silver, gold and bronze and dedicated them–along with the silver and gold he had dedicated from all the nations he had subdued–to the Lord. David did not keep these things for himself but dedicated them to the Lord who preserved him wherever he went.  It was the Lord who had given him victory over the Philistines, Moabites, the king of Zobah, the Syrians who came to help Hadadzer, king of Zobah, the Ammonites and the Amalekites.  The Edomites became David’s servants.

Like David, let us give God what He deserves.  We give Him our best because He preserves us and gives us victory over our enemies, battles, etc.  “It is good to give thanks to the LORD, And to sing praises to Your name, O Most High” (Psalm 92:1).