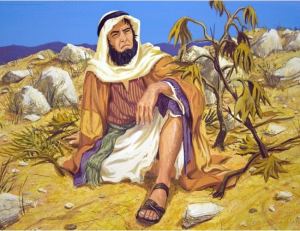 Insecurity, doubt or fear prevents us from following God’s will.  We see throughout the Bible that God used people to fulfil His plans—His work when He could have easily done it on His own.  God likes to do great things through people.  He used Moses to bring the Israelites out of Egyptand through him He performed great wonders.  However, when God first approached Moses, Moses was insecure and doubted his ability to speak to Pharaoh and do God’s work.  “Who am I that I should go to Pharaoh and that I should bring the children of Israel out of Egypt?” (Exodus 3:11)

God assured Moses that he would not be alone, that He would be with him.  Still, Moses protested.  He argued that he was slow of speech so God said to him, “Who has made man’s mouth?  Or who makes the mute, the deaf, the seeing or the blind?  Have not I, the Lord?  Now therefore go and I will be with your mouth and teach you what you shall say.” (Exodus 11-12)  After much protesting from Moses and persuading from God, Moses finally agreed to do as he was commanded.  And he delivered the Israelites and led them to the Promised Land.  He was known as the great deliverer and lawgiver ofIsrael.  There was never another prophet like Moses.

Jonah ran away instead of going to Nineveh as God commanded him because he was afraid.  As a result, a large fish swallowed him where he spent three days and three nights.  From the fish’s belly, Jonah prayed.  The Lord spoke to the fish and it vomited Jonah onto dry land.  God spoke to Jonah again, “Arise, go to Nineveh, that great city, and preach to it the preaching that I bid you.”  This time Jonah obeyed.  The message was, “Yet forty days, and Nineveh shall be overthrown.”  The people of Nineveh repented and God in His mercy did not bring disaster on them.

Jonah was not happy about this.  It is as if he felt that he had wasted his time going toNineveh, telling them that they would be destroyed for their wickedness yet, because they had repented, they were saved.  He wondered why God had bothered to send him in the first place when He could have delivered His own message and shown mercy to the people when they turned from their evil ways.

To prove to Jonah how irrational his anger was, God prepared a plant and had it come up over Jonah to shade his head.  Then, He prepared a worm and it damaged the plant and it withered.  Then, He prepared a heavy east wind and the sun beat on Jonah’s head so that he grew faint.  Jonah wished for death.  Then, God asked him if it was right for him to be angry about the plant.  Jonah’s reply was that it right for him to be angry, even to death.  God’s response was, “You have had pity on the plant for which you have not laboured, nor made it grow, which came up in the night and perished in a night.  And should I not pity Nineveh, that great city, in which are more than one hundred and twenty thousand persons who cannot discern between their right hand and their left—and much livestock?” (Jonah 1:2-3, 17, 2:1-10, 3:1-11)

What we learn from these two examples is that when God wants you to do something don’t argue or run away, just do it.  God uses people to do His will when He could easily do it on His own.  Once people repent of their sins, God shows His mercy and saves them.  We should praise God and rejoice when He is gracious to those who sin against Him and repent instead of getting angry.  God’s love is not reserved for some people but for ALL people.  Jonah failed to recognise God’s love for all people—Jews and Gentiles alike because of the animosity between the two.  The story of Jonah teaches, much like Jesus’ story of the Good Samaritan, that we should put aside our differences and help those who are hurt spiritually, emotionally and physically.

Jesus spoke to a Samaritan woman at a time when Jews did not associated with Samaritans.  He wanted her to know that there would come a time when true worshippers will worship the Father in spirit and truth instead of on the mountain where the Samaritans worshipped or in Jerusalemwhere the Jews worshipped.  We can worship Him anywhere and anytime.  God wants all people to know him.  As Paul points out, “Or is He the God of the Jews only?  Is He not also the god of the Gentiles also?  Yes, of The Gentiles also, since there is one God who will justify the circumcised by faith and the uncircumcised through faith.” (Romans 3:29-30)